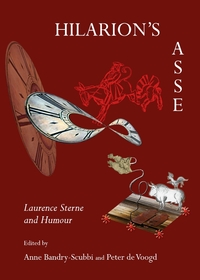 The humour of Tristram Shandy has often been acknowledged, but it is not easy to find scholarly articles on Laurence Sterne which suggest that their authors laughed as they wrote. Nine authors have been invited to redress this in the year of the tercentenary of Sterne’s birth. This volume offers nine different facets of humour, a kaleidoscope which enables readers to recombine at will the genial, the bawdy, the sentimental, the ludicrous, the hobby-horsical, the philosophical, the irreverent, the incongruous and the facetious, sending the text spiralling out of the page.

Chapter One : Tristram Shandy as Comedy of Errors
Madeleine Descargues-Grant

Chapter Two :“Make them like unto a wheel”: Motion and Humour in Tristram Shandy
Anne Dromart

Chapter Three : A Book that Excites Laughter: The Physiology of Laughter in Tristram Shandy
Alexis Tadié

Chapter Seven : “Into What a Delicious Riot of Things Am I Rushing?”: Material Things and Humour in Tristram Shandy
Paul Goring