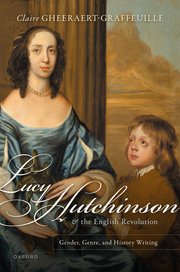 In Lucy Hutchinson and the English Revolution, Claire Gheeraert-Graffeuille explores Lucy Hutchinson’s historical writings and the Memoirs of the Life of Colonel Hutchinson, which, although composed between 1664 and 1667, were first published in 1806. The Memoirs were a best-seller in the nineteenth century, but largely fell into oblivion in the twentieth century. They were rediscovered in the late 1980s by historians and literary scholars interested in women’s writing, the emerging culture of republicanism, and dissent. By approaching the Memoirs through the prism of history and form, this book challenges the widely-held assumption that early modern women did not – and could not – write the history of wars, a field that was supposedly gendered as masculine. On the contrary, Gheeraert-Graffeuille shows that Lucy Hutchinson, a reader of ancient history and an outstanding Latinist, was a historian of the English Revolution, to be ranked alongside Richard Baxter, Edmund Ludlow, and Edward Hyde.

Claire Gheeraert-Graffeuille is a Senior Lecturer in British Studies at the Université de Rouen Normandie and a member of the research team ERIAC. Her research, at the intersection of literature and history, focuses on gender, historiography, and politics in seventeenth-century England. In 2005 she published her first monograph, La Cuisine et le Forum : L’émergence des femmes sur la scène publique pendant la Révolution anglaise, and, with Géraldine Vaughan, she edited Anti-Catholicism in Britain and Ireland, 1600-2000: practices, representations and ideas (2020).