The Circulation of Anti-Catholicisms in the Anglo-Atlantic world, 17th-21st Centuries 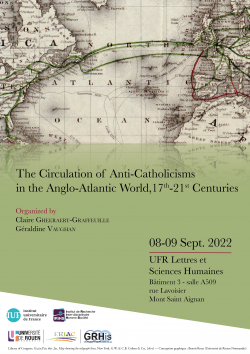 In line with the historiography of cultural transfers, this conference focuses on the dynamics of anti-Catholicism (in its practices, discourses and representations) travelling back and forth the two sides of the Atlantic. How were discourses and practices carried out by preachers, travellers, writers and temporary migrants disseminated on both sides of the Atlantic? How did anti-Catholicism evolve in a colonial context in which the Established Churches of Britain were not all-powerful? Furthermore, how did anti-Catholicism adapt to ‘religious toleration’ in the colonies? The networks and correspondences underlying these exchanges, the practical form they took and the material, political or ideological constraints which ruled them will be under close scrutiny.

15.00 — Owen Stanwood (Boston College)
Lessons in Tyranny and Tolerance: Huguenot Refugees and the Ambiguity of Antipopery in the British Atlantic World

16.30 — Jessica Harland-Jacobs (University of Florida)
The Bishop Question and the British Empire, 1760s-1820s