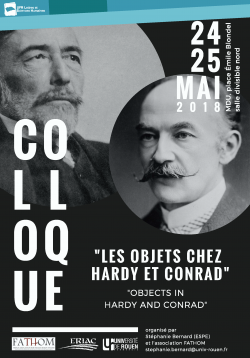 According to The Concise Oxford Dictionary, an « object » is « a thing placed before the eye or presented to one of the senses ». The word comes from the Latin word objectum, itself derived from objicere, which means « to throw » (jacere) « before » (ob). An « object », whether it is an artifact or not, may be put to some purpose. But the object as « thrown before » the subject, as a « person or thing to which action or feeling is directed », may also refer to the thing aimed at by human desire. Therefore the object is not just what is owned, or could be owned, but also what one desires.

With Hardy, and then with Conrad, the nineteenth century drew to a close. In the Victorian era, especially after the Great Exhibition of 1851, objects multiplied in the daily life of English people. Homes became cluttered with decorative objects, and Victorian novels were said to be « crowded novels » (E. K. Brown), filled with a multitude of useless details or objects. Victorian realism has often been associated with an aesthetics where fullness prevails, in which proliferating objects come to punctuate the narrative, thus producing numerous effets de réel. Yet those objects also serve as metonyms, or metaphors, which represent personalities, situations, ideological positions.

The most striking objects are indeed powerfully symbolic, or can function as disturbing elements which cause the narrative to digress towards micro-comical effects, like the hat that Joes does not know what to do with when he visits Pip in Great Expectations. What about the hat lost by Bathsheba in Far from the Madding Crowd, and found by Gabriel Oak? What can be said of those strange hats which, in Joseph Conrad’s fiction, for instance in Under Western Eyes and The Secret Sharer, produce a punctum effect in the studium of representation, creating confusion in the perception of reality, in an aesthetics which is radically different from that of Dickens?

One may also wonder about all those « surplus objects » which, far from anchoring illusion in diegetic reality, disturb that reality: the red ribbon in Tess’s hair, the roses she is adorned with on her return from Trantridge, the ring which shines among odds and ends on the grassy floor in The Mayor of Casterbridge, the engagement ring which Boldwood forces onto Bathsheba’s finger, etc.. Objects can also be missing: they may be lost, found, handed back to their owner, retrieved after perilous operations. Their life extends over the years, during which they become loaded with meaning and memories; they can be exhumed (like those antiques that Hardy was so fond of), given, exchanged, sold, in complex circulations of meaning and emotions. When the lost object becomes irreplaceable, we enter the realm of tragedy: it means we are drawn to the Thing, « the absolute aim of desire » (N. Braustein), towards which desire is oriented but which remains unattainable, for « the tendency towards the Thing is the death-drive as the final destiny of all vital urges » (N. Braustein).

Focusing on objects in Conrad and Hardy means raising the question of their texts as objets d’art-sublime objects, in Lacan’s words, i.e. « elevated to the dignity of the Thing » (J. Lacan, The Seminar, VII, « The Ethics of Psychoanalysis »). What depths does the literary text attempt to make us see, to make us hear, in Hardy as well as in Conrad? We will ponder on the different means by which « the heart and inner meaning » of things – « the heart of darkness » – may be approached: « my art is to intensify the expression of things, as is done by Crivelli, Bellini, etc. so that the heart and inner meaning is made vividly visible » Hardy explained (The Life of Thomas Hardy, 3 Jan. 1886). The « ring », that small hollow metallic object which surrounds a void and catches the eye in Hardy’s stories also connotes the resonance which the voice of the text allows us to hear. Similarly Lord Jim’s « gem » has, if we believe Conrad, the charm of works of art (« the futility, often the charm, and sometimes the deep hidden truthfulness of works of art »Lord Jim, p. 168). What do Hardy and Conrad have in common in that respect, and what differentiates them? Behind the semblances which cover things, what unnameable thing may be made visible (and audible) by the art of those two writers?

One should not either forget the book as object. One may focus on the materiality of the Conradian or Hardyan text: how does the printed object, in three or one volume(s), serialized in a journal, or published in any other format, illustrated or not, modify our approach of the Hardyan or Conradian text? Those formats generate strong constraints, as regards the construction of the narrative-for they require specific writing strategies-and also in terms of the aesthetics of reception. Those considerations mattered to the Victorians, but they also matter to us, who are faced with the growing « virtualization » of literary objects.

11h00 – Nathalie MARTINIÈRE : “‘He had tied a bit of white worsted round his neck’ (Heart of Darkness): Focusing on Unexpected Details in Conrad’s Fiction”

15h30 – Jane THOMAS : “The Footprint as Object in Hardy’s The Woodlanders and Conrad’s Almayer’s Folly”

Session 3 – “The Imps of the Clock”: Delayed and Fractured Perception

09h30 – Émilie LORIAUX : “The Clock and Other Things: the Cherished Objects of a ‘Time-Torn Man’”

10h00 – Catherine LANONE : “Clocks and Watches, or (Mis)-Timing in Hardy and Conrad”

Session 4 – Thing and Nothing
15h30 – Andrew HEWITT : “Weapons of Choice in Hardy and Conrad”

16h30 – Josiane PACCAUD : “The Sublime Object of Ideology in ‘Karain’ (Tales of Unrest)”