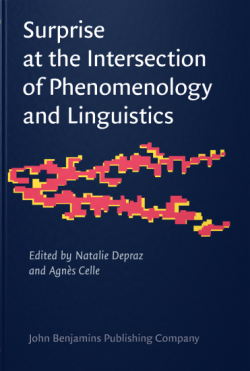 Surprise at the Intersection of Phenomenology and Linguistics

Surprise is treated as an affect in Aristotelian philosophy as well as in Cartesian philosophy. In experimental psychology, surprise is considered to be an emotion. In phenomenology, it is only addressed indirectly in phenomenology (Husserl, Heidegger, Levinas), with the important exception of Ricœur and Maldiney; it is reduced to a break in cognition by cognitivists (Dennett). Only recently was it broached in linguistics, with a focus on lexico-syntactic categories. As for the expression of surprise, it has been studied in connection with evidentiality in languages that encode surprise morphosyntactically. However, how surprise is encoded in languages that lack an evidential morphosyntactic system has been largely unexplored.

This book provides new insights into the dynamics of surprise based on a heuristic hypothesis tested against the investigation of time, language and emotion. It is intended to arouse the interest of a multidisciplinary audience keen on crossing the disciplinary borders of phenomenology, cognitive sciences, and pragmatics.

The theoretical approaches adopted in this collection of articles rely on experiments and corpus data. They advance knowledge by building on robust empirical results coming from psychology, microphenomenology, linguistics and physiology.

Part I. The temporality of surprise