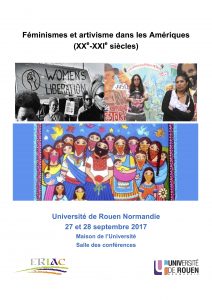 Women’s movements have a long, diverse history. Yet, the diversity and plurality of these female voices and modes of action have been often occulted. Like in other areas of thought and action, western-centric theories and manifestations have been the most visible. These narratives quickly became universal. Many recognized theorists as well as the periodization of feminism into “waves” relate only to white, upper- and middle-class women. However, other forms of expression and action have also developed early on. North American Black feminism dates back to the 19th century and was part of the abolitionist movement[1]. In Ibero-America[2], the political organization of black women started later but recent research has underlined the agency of enslaved women, notably through disobedience[3]. Indigenous women’s political participation is important in their communities since the colonial era, as evidenced by the crucial actions of Gregoria Apaza, Bartolina Sisa and Micaela Bastidas during Túpac Amaru II’s revolution (1780-1782)[4].

Any investigation of organization by women of color should take into account the sociohistorical contexts that influence their development. Systems of colonial exploitation (plantocracy, slavery, latifundia) have conditioned forms of political action in the Americas. Bodies of Black and indigenous women were particularly subjected to control and repression. These circumstances limited possibilities for reunion and political engagement for a long time. Surviving oppression has been a full time job for many women. For all that, they never stopped to fight for justice. These struggles have been rather autonomous, numerous and varied over time and/or space. They have not yet resulted in the creation of global movements.

These particular histories also explain the apparent “delay” in the integration of these actions in Herstory. This is why this conference wants to re-evaluate the role and importance of these movements.

Given the dispersed and multifaceted nature of their forms of action, the theoretical importance of American women of color has been invisible, despite being rich and vigorous. For example, Black feminist thought in the United States has revolutionized theory by introducing new questions about the subject of feminism (“we, women”) and proposing new concepts to analyze forms of domination, like intersectionality (coined by law professor and leading critical theorist Kimberlé Crenshaw). Inspired by the concepts, histories and experiences unique to Black women, Ibero-American feminists have developed an equally rich critical thought called decolonial feminism[5]. Feminists like Ochy Curiel, Lélia Gonzalez or Yuderkys Espinosa propose an antiracist feminist thinking rooted in indigenous and African-American history. Through their experience, these feminists also question gender relations and conceptualize the notion of political lesbianism[6].

The specificity of counterhegemonic feminisms is due to a unique articulation between theory and praxis. For instance, feminist ARTivists are increasingly expressing their demands across the continent, notably through hip hop or visual arts – like the collectives “Somos guerreras” or “Batallones femeninos”. These forms of action and activism are part of a global struggle that does more than questioning patriarchy only, that does more than many white and bourgeois feminist collectives. These feminists urge « to fight the whole world » as Michele Wallace wrote in 1975[7]. For Abya Yala feminists like Ochy Curiel or Yuderkys Espinosa, it is necessary to fight against patriarchy, racism and the coloniality of power, all at the same time and by drawing on the specific history of indigenous and Black people. The body plays a fundamental role in both the issues raised and privileged forms of action. As a site of colonization, the body has to be reinvested and re-appropriated through arts and performance.

This conference will examine the plurality and the strengths of these movements across America. We invite papers that deal with the specific features of these feminisms and their contribution to the fight against race, gender, sexuality and class oppression. Comparative works are particularly encouraged.

We welcome proposals for individual papers on the following themes:

Theme 1 – Afro-feminisms
North American Black feminists first questioned hegemonic feminism by drawing from their own experiences. They integrated categories of race and sex to enrich Marxist critical theory and Materialist Feminism. Black Women’s movements in Ibero-America are more recent. They articulate their filiation with Africa to common claims they share with other movements of Latin-American Women, especially indigenous. In Brazil, Lélia Gonzalez forged the term “amefrica ladina” to highlight these links. In the Hispanic world, other strong movements emerged in Cuba and Peru.

Theme 2 – Feminisms on the Borders
Given the plurality of American women’s movements, it is important to mention how experience, knowledge and practice have circulated all over America. These interactions will be analyzed more through their actions than through theories. For example, Chicana feminists stand at the intersection of different cultures, references and practices and have redefined themselves as mestiza or “from the border”.

Theme 3 – Decolonial Feminism
This movement emerged at the beginning of the 21st century but is rooted in the work of decolonial masculine thinkers. It deepened it by integrating gender and sexuality issues. Using a non-eurocentric standpoint, decolonial feminism calls attention to the thought produced “from the margins by feminists, women, lesbians and people of color” (Y. Espinosa).

Theme 4 – Indigenous activism
Women in indigenous communities never confined themselves to private spaces. However, since the conquest, they have been subjugated to the colonial patriarchal system. In the last third of the 20th century, they have mobilized indigenous groups politically in Chiapas, Guatemala, Ecuador and Bolivia. These movements claim to be the “original people” with specific rights in order to lift themselves out of their status of second-class citizens. But it is also a fight against capitalist and neoliberal expansion in their territories as shown by the examples of Berta Cáceres (lenca), Máxima Acuña (quechua) ou LaDonna Brave Bull Allard (sioux).

Theme 5 – Bodies, arts and action
Activists in the Americas wear many different hats. Art is an organizing strategy to fight oppression. Literature and music have become places of contestation. North American writers like Audre Lorde, Gloria Anzaldúa or Cherríe Moraga are iconic examples. Music is another space for expression and action: Ochy Curiel is a singer-songwriter in addition to being feminist theorist and activist. Others devote themselves to artistic performances, urban arts and/or mobilize audiovisual material to defend the rights of indigenous, Mesoamerican and Andean communities.

Theme 6 – Feminisms and direct action
In the Americas, many women who were associated with indigenous and afro-feminist activism have also fought capitalism in armed revolutionary movements: The Black Panther Party in the United States, the Zapatista movement in Mexico, the Revolutionary Armed Forces of Colombia, the Shining Path (SL), the Túpac Amaru Revolutionary Movement in Peru, or from the Sandinista National Liberation Front (FSLN) in Nicaragua.

Proposals for presentations in English, Spanish, Portuguese or French are welcomed and shall be submitted before 15 mars 2017 at the latest by e-mail to colloque.femart@gmail.com. They must include:

An independent reading committee will select papers from the conference for publication in a special journal issue or an edited book volume.

[2] Different indigenous communities and organizations refuse to use the term “America” and prefer instead the term “Abya Yala” to designate the American continent. This expression has been taken up by decolonial thinkers.